Hi, it’s been a while since my last post, I think this one will make it worth the wait.

you probably have noticed I worked together with Charisse a lot last year, I would like to show you some pictures from our first collaboration to our last one, as some sort of a tribute to this young woman, that in front of my lens, evolved from a shy and uncertain person, to a very self-aware and confident model.

I asked her yesterday to write down in her own words about our cooperations, and she did, Italic words is her writing.

We met at an exhibition in Damme, Belgium, she seemed interested in my work. She flipped trough my book ‘Women’ and showed even greater interest after that. We agreed to keep in touch.

Ludwig and I met on an exhibit in Damme, May 2016. He gave me a business card so that I could contact him if I would be interested in working with him. At that time I was an insecure model with limited experience, but the pictures he was exposing and the atmosphere they contained were very into my liking.

First shoot together, June 20, 2016. We met at Godshuis in Sint-Laureins, Belgium, and we shot a couple of rolls of 120 film, and a digital session. She was very shy at the moment, and there were too many people running around at the Godshuis, so we moved outdoors for the rest of the day.

Not much later, we agreed on doing a photoshoot at Godshuis in Sint-Laureins. He arranged a MUA because I wasn’t skilled in make up back then. I felt pretty nervous but he immediately put me at ease during my posing. He was very tranquil, careful, polite and made me adjust my poses in a very respectful way. He never made me do anything I wasn’t comfortable with. So it became pretty easy to feel comfortable and my confidence was slightly growing. This first shoot resulted in pretty images and we were both feeling content.

Second shoot together, she came to my place, I have an old, small confectioners workshop in my garden, and we did an afternoon session there. She showed more courage and confidence already. She hurt her leg while smashing the radiators with a big sledgehammer. April 5, 2017.

The year after that, we agreed on shooting a second time, this time in his “studio in progress” in Ronse at his place. Great, because no potential peeping toms. We started working in a similar theme like the first shoot, but after a while he asked me if I wanted to help him smash the studio. I got to put dirt on my face and Ludwig handed me a sledge hammer that was almost my own height in size. “Knock yourself out”, he said. So I smashed the huge radiator with it, resulting in a bruise and scratch on my leg. Ludwig was taking pictures of me doing so, on a safe distance. The images were very cool and tough looking, something a lot different than the romantic, elegant moods we worked on first. It felt good to work on different themes.

Third time around, I still had to get my ways around the studio, and we worked there for the first time. It was a very fruitful day, with an apple as desert 🙂 Charisse had changed, she had become very much aware of her female figure, and the sensuality in her poses was suddenly obvious. Februari 22, 2018.

Another year later, in February 2018, we decided to do a shoot once more, in his new studio. This time he asked me what I wanted to do, and I felt like taking the next step. Something more sensual, maybe even a little erotic. In the 2 months before that, I had the chance to express that side of me in poses and expressions, because I had worked with another photographer intensively. Now I wanted to do something with it in Ludwig’s style. Grown strongly and without any obligations coming from Ludwig, I got in an endless flow of poses, and he just let me work by myself, he let me be myself. It all resulted in an awfully long day for the both of us. Exhausted but extremely happy about the resulting images, we agreed upon working together a lot more in the future. Those mutual satisfied feelings gave me an enormous boost.

Shortly after that we met again, for a shoot in the castle I’m able to use as a location if I want to, here we shot ‘the beauty and the beast’, ‘the great great granddaughter’, and a lot more beautiful images. We are march 23d, 2018

Only 2 months after that, we got together again to shoot, this time in a beautiful little castle in Tournai. The shoot went like all previous shoots, except now we started to understand each other more and communicating got even better. It got easier to get into eachother’s minds and create images fitting in a certain theme. 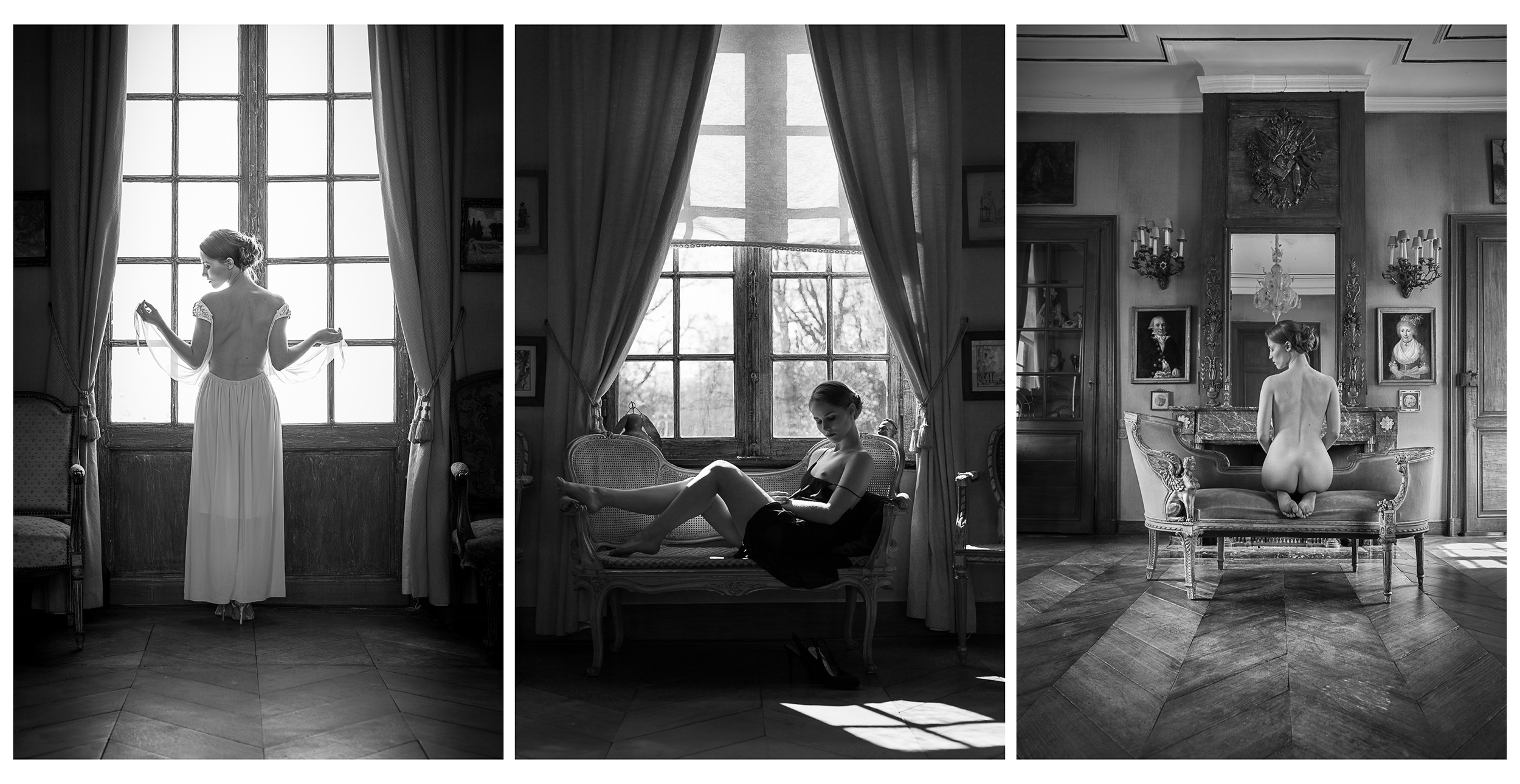 5th shoot together, a hot summer day last year, and not really arranged long before, I just called to find out if she was available, and ready for an experiment, and a day later she took the train to Ronse again. Shot in my garden workshop, and outdoors. ‘when things get messy’ and ‘statue’ … July 3d, 2018.

After that shoot we had another shoot on a hot summer dat where we experimented with some leftover clay he had in his garage. The shoot contained the preparation (me mixing the clay powder with water in a big pot, with my bare hands), the execution (me rubbing the mixture all over my body, including my face, neck and hair) and the result (the drying of the clay on my body while I was sitting still on a big cube). The whole process was a lot of fun to do, getting all dirty and feeling like a child. Again, Ludwig made beautiful images of it. Afterwards I first got a cold shower from the garden hose and then I could take a warm shower.

And hopefully not the last collaboration, and certainly not the least, again in the studio on October 30th, 2018. Long time since I used flash light, so let’s get up-to speed again with some different settings. Charisse is always ready for some new things, she is physically limited due to a muscle disease, but she has never let me down in her efforts of making every shoot successful and worthwhile, she understands what I want to achieve as a result, but she’s not afraid of giving input if she things it would make images even better,

After that we had another shoot in the studio on a cold and rainy day, working on images based on the work of Andreas Bitesnich, but also a heavy make up and water combination theme. That’s what I like about the collaborations I’m having with Ludwig: the exchange and being open towards each other’s ideas, always trying new things in a style we both like, but especially the mutual trust we built in these past few years.

We have a very good relation with each other, but the professional level we work in stays very well maintained. In the mean time I got to know a lot of photographers with whom I got to work together as well, but Ludwig stays an absolute favourite to me. Because of his professional attitude, easy personality, and the endless respect he has towards his models and their limits and conditions.

Thank you very much Ludwig, for this amazing journey. I’m looking forward to keep working with you in the future.

Thank you Charisse, it is a pleasure working with you! I might do a book on you some day!

Some images you might have seen before, but I tried to show you some previously unpublished pictures too, as from a session there’s always a lot of material, so I cannot publish all, sometimes I forget about a series, sometimes when I review, new ‘keeper’s get my attention …

thanks for reading, maybe you might consider buying a large print from any of these? …

She can be found on facebook now as Sahri Nimi – https://www.facebook.com/sahrinimi/